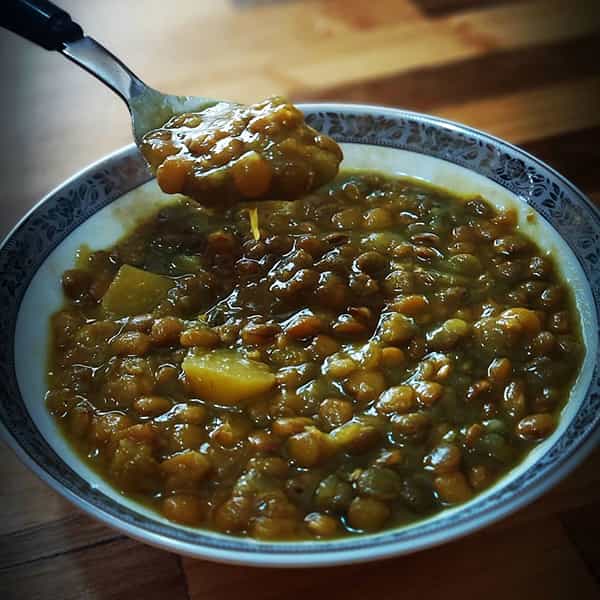 Adasi is one of the traditional and genuine Iranian Ash which is served as a breakfast meal, in order to see this cooking tutorial stay tuned.

The recipe of adasi

First fill a big bowl with water and soak the lentil in water for 15 minutes after this time is passed rinse and clean the lentil. If you're using local lentil make sure to clean it carefully because there might be some stones in it.

In this phase dice the onion and then fry it in a suitable pot with 1 table spoon of olive oil to make it light and bright. Next add some turmeric and continue frying so the turmeric is absorbed by the onion.

Increase the heat so the water boils faster, after the water in the pot started boiling lower the heat so the lentil cooks on a gentle heat. Next fry white flour with 1 table spoon of olive oil in a small pan to get rid of its raw smell and taste and finally have it colored creamy.

After frying the flour well add it to the lentil. This causes the lentil to get a nice glaze. Next chop the potato into a small cubes so they're cooked easily, then rinse them with cold water and put them aside.

After the lentil is half cooked add the chopped potatoes to the pot. 30 minutes is enough for the potatoes to be cooked and if we pour them too early in the pot they become crushed and ruin adasi's appearance.

After the lentil is ready you can use sesame, fresh parsley or fried onion based on your taste to decorate it. After pouring the lentil in your desired dish pour the remaining olive oil on it. If you like you can use some slices of sour lemon besides lentil.

If you want to use mushroom in addition to potato in adasi, you can add between 100 to 200 grams of mushroom. Fry the mushroom with some oil and lemon juice and add it to the lentil at the last 15 minutes. Using lemon juice for frying the mushroom causes them not to become darker in color.

Lentil doesn't need to be soaked like pea or bean, 14 minutes of soaking for softening and cleaning lentil is enough. Another point is that if you soak lentil for a long time, it'll be softened while cooking too much and it may Time of cooking lentil with gentle heat is about 1 hour and it shouldn't be on the heat more than that.

Among the ingredients that make adasi more delicious we can refer to garlic and onion. If you don't have any problem with the taste of garlic, you can use between two to three cloves of it. Too much onion also makes it more delicious, but because the recipe above is prepared for all tastes, garlic hasn't been used in it and the amount of onion is also balanced.

Having potato in adasi in addition to making it more delicious, makes it glazier. But if you don't like to use potato in your adasi you can omit it. We suggest you add more fried flour in adasi if you're omitting potato so your adasi would be glazy after being cooked.

In order to make adasi glazy, there are different ways that one of the common ways is to add fried flour. Fry some flour in oil and then add it to adasi while cooking in, doing so gives a nice glaze to adasi.